If you could pick one word for 2022, what would it be? Twitter, Elon Musk, Ukraine, TikTok, or Queen? You can get lost in your thoughts for a whole day choosing among thousands and thousands of words, but the ultimate choice was already made. Yes, it is crazy because the year hasn't even finished yet! But it's not an issue for the world's biggest and most trusted dictionaries. They all decided on the 2022 word of the year at the end of November. And if you think that the dictionaries agreed on the same 2022 word, you couldn't be more naïve.

Merriam-Webster, Cambridge, Oxford, and Collins dictionaries have their criteria for determining their 2022 word of the year. Nonetheless, all the chosen words have something in common. They all reflect on the world's problems and most discussed and searched topics for the past 12 months. That is why it would be wise not to limit you to one word of the year 2022 and enlighten you with every single one. So, prepare to expand your vocabulary with the hottest words in 2022!

The American Merriam-Webster dictionary claims "gaslighting" to be the word of 2022. Why? The number of searches of the term on the official Merriam-Webster website increased by 1,740 percent this year. 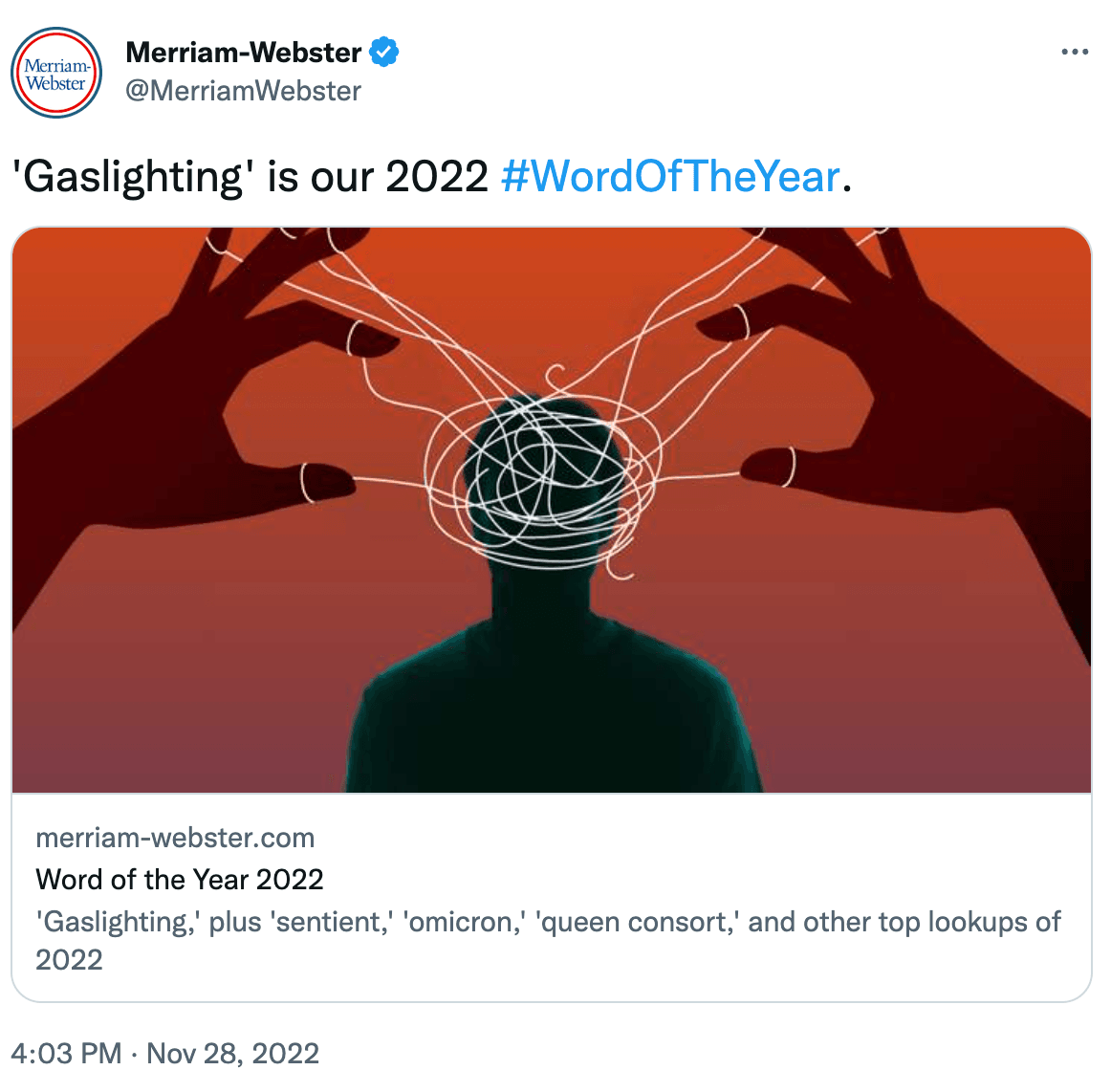 So, what does the term "gaslighting" mean? According to the definition given by Merriam-Webster dictionary, gaslighting is "the act or practice of grossly misleading someone, especially for one's own advantage."

For the first time, the Merriam-Webster word of the year 2022 was mentioned in the title of a play in 1938 and adopted film starring Angela Lansbury, Ingrid Bergman, and Charles Boyer called "Gaslight." The story focus on the man who is trying to convince his wife that she is insane by telling her certain things that happened never took place.

If people started using the word "gaslighting" so long ago, why did it become so popular in 2022? It's a good question. The reason is a rising interest in analyzing relationships through all sorts of media – tv, print, and digital. People try to give definitions to different behavior models in relationships to make it easier to recognize them and protect yourself from their negative influence.

The other popular words in 2022, according to Merriam-Webster dictionary, are "oligarch," which attracted attention after Russia's full-scale invasion of Ukraine, "Omicron," a new milder version of the COVID-19, and "Queen Consort," the wife of Britain's King Charles, Camilla, became after death of Elizabeth II.

Since we are moving forward to the British dictionary, it is incredibly bizarre to realize that the word of the year 2022 chosen by the Cambridge dictionary comes from American English. That's not a joke; we swear to all gods out there there is a logical explanation.

So, have you ever heard of the popular online game Wordle? It's a game where people are given one five-letter word daily to guess. Then, they have five tries to fill the gaps with the correct term. And, on May 5, game users outside of the USA struggled to guess the word "homer." And when people finally guessed it, they couldn't understand what that was, so they went straight to the Cambridge dictionary. As a result, the number of word searches went up to 65,000, which made it the 2022 word of the year.

According to the Cambridge dictionary, "homer" is a short version of homerun which means "a point scored in baseball when you hit the ball, usually out of the playing field, and are able to run around all the bases at one time to the starting base."

The game Wordle made people look up lots of different five-letter words. Except for "homer," the most popular words in 2022 were caulk, tacit, humor, and bayou. And the term "humor" played a bad joke with people who don't speak American English because it should be written in six letters, "humour" in the British spelling.

Word For The Year 2022: Oxford Dictionary Number One

When the first two dictionaries chose a word for the year 2022 by analytical data, for the first time, the Oxford dictionary let the English speakers make the choice of the Word of the Year.

First, Oxford's editors picked candidates for voting by analyzing statistics in the Oxford English Corpus. Then, they gave 300,000 people two weeks to vote for their choice. And after all, Oxford Languages announced that the 2022 word of the year is the slang term "goblin mode. "

According to Oxford Languages, it means "a type of behaviour which is unapologetically self-indulgent, lazy, slovenly, or greedy, typically in a way that rejects social norms or expectations."

Even though it made its first appearance on Twitter in 2009, it deserves to be the word of the year in 2022 since it went viral on social media in February. "Goblin mode" turned out to be a perfect description for people who didn't want to go back to "normal" life after COVID-19 restrictions and expressed it on social media.

The second and the third places in the voting went to "metaverse" and "#IStandWith."

It may seem peculiar, but Collins Word of the Year 2022 is actually a new term for CollinsDictionary.com. So, if you have never heard of "permacrisis" before, there is no need to worry; you are not alone in this. Instead, let's get more familiar with this term.

According to Collins dictionary, a permacrisis is "an extended period of instability and insecurity, esp one resulting from a series of catastrophic events." Unfortunately, due to the last events in the world, this term perfectly describes the year 2022.

The other words on this year's shortlist also refer to the significant events in 2022, such as the Russian war in Ukraine and the UK economic crisis. The list includes the following words "Kyiv," "partygate," "splooting," "warm bank," "Carolean," "lawfare," "quiet quitting," "sportswashing," and "vibe shift."

How To Learn Words Of The Year With Promova

After reading this article, it may seem that grasping all the English vocabulary is unreal. And that is true. Even English native speakers struggle to understand complicated phrases or words from others varieties of the English language. But learning a language is a life-long process, so you should consider it a fun time, not a punishment or a goal that can be achieved quickly.

However, you should proceed to expand your vocabulary in English if you want to reach fluency. For that matter, you can learn new English words every day on the Promova app. Moreover, we regularly create up-to-date sets with adorable flashcards to help you memorize words in an easy and gamified way.

Also, you start working on your English vocabulary by signing up for the Promova tutoring program. The language learning platform allows you to join group classes by level or go for individual tutoring. In both cases, you will get a personalized learning plan with the best materials and guided practice with the certified native-level tutor of your choice.

Working on your English with Promova will save you from guessing what the next word of the year means; you will know it.

The word of the year is always connected to the most trending events in the world. People look up for English words to better understand what is going on in the news or social media. That is how they become words of the year. The interest in certain English words demonstrates that people are eager to learn more to stay up to date. And because the Internet mostly runs in English, it is vital to keep learning new words daily. You can never be sure that some word from the early 20 century won't become trending one morning. To memorize more relevant words for this year, check our 14 Popular Words 2022 That You Have Often Heard article.